History is written by the winner.s In ancient times, people overwhelmingly separated into two groups that aligned along reproductive lines. The language that we overwhelmingly use today to describe sex, sexuality and gender was developed by heterosexual (allegedly, anyway) cisgender people. I think most people have been working on male and female as fact, whereas that only works for most people, and a bunch of people, the number yet to be determined, it is only the best approximation possible at the time.

The inuit have how many words for snow? And we have ended up in the position of having 2 words for sex when there is much more variety. We supposedly have to justify why someone doesn’t fit the mould, and even then they are a sub-type of one of the two sexes. Nope.

What do I think about the hubbub about transphobes getting upset about trans dads etc? Being human is complicated. People are just being people. Trans people are even more complicated. And society expects us to fit into neat little boxes and perform fixed roles with exact definitions. Why? What makes you so scared that you need to do these things? Does society reward you for them?

I feel like a girl. How? Why? Except nobody asks a cis girl why she feels like a girl. A trans girl just knows why too. I like the words that sister girls and brother boys use – female spirit etc.

I am relatively new to the queer space, having only come to terms with being trans in a, figuratively speaking, brain explosion in July 2016 so I am still learning the lexicon. Gender non-conforming people have always existed.  Examples. Sex. Then gender. The same but not really. Then divergence. Society has well and truly moved on from having a binary definition for sex, but, in pockets, are having conniptions coping with a gender spectrum and what that means for our society, still primarily anchored to a binary sex system. People’s gender mostly fit their sex. Sex isn’t an exact definition though … no two women are the same and no two men are the same. Sex is more dividing people into two halves … women and men. But what is a woman? A person with protruding breasts? Not all women have breasts. A person that can bear children? Not all women are able to bear children? People with a uterus? Not all women are born with a uterus. A person with XX sex chromosomes? Not all women have XX chromosomes. Without delving into the detail, it may seem easy to define people as male or female, but that simply isn’t true. I know that most people think that they know how to define men and women, but the more you try to define it, he binary sex system is a shortcut. to make life easier. As humans we like to categorise things … our brains consume much less energy when we don’t need to revisit every single facet of every single thing and event every single time.

What is a woman? An adult human female? Who is female? You know … women! Circular questions and answers. 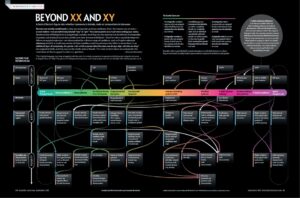 I suspect that most people subconsciously assume that a particular word uttered will always have the same meaning heard, but this may not necessarily be the case … intonation of speech, lived experiences, existing prejudices, any use of irony or sarcasm, context, body language, perceptions, emotions and other factors may all come into play to ascribe multiple meanings to the string of letters and/or syllables we call words.

Any attempt to use words as strict definitions for any characteristic of human beings, such as gender, will be inherently fraught. Human beings exist not in a binary sex and/or gender world as was once (religiously) thought (and taught) by many, but in a wonderfully complicated, multi-dimensional spectrum. Humans tend to summarise things they experience into binary categories for ease. Day vs night is one such example, but isn’t there also dusk and dawn … two of the most beautiful times of the day? Gender, or sex as it was obfuscating called when I was growing up in the 70s and 80s, is not generally experienced or expressed as either strictly male or female. Most people have a mixture of physiological and emotional traits, however slight, however noticeable, however acknowledged. Often though, their community and/or society may overtly or covertly encourage them to suppress these traits to “fit in”. Examples include waxing what may be considered by some to be excess or out-of-place body hair, using (or not using) certain words and avoiding certain activities to the point of functional detriment. At birth, surgical intervention has been used to “tidy up” any genitals that did not sit within an expected range of appearance.

It is impossible to consciously glance at every single human being, and without a shadow of a doubt declare with complete accuracy the sex that they were assigned at birth.. Most maybe … but not all. Ask time goes by, the likelihood of being correct diminishes as more trans people are able to commence affirming hormones prior to their natural puberty and non-binary people are able to openly dress and groom themselves in a more affirming way. Most people assume that it is an innate ability to glance at a person and know their sex assigned at birth. In fact, what unfolds is their brain averages out all of the characteristics that they are able to observe and sub-consciously assigns the most likely binary gender. Some of these characteristics may be biological (eg larger breasts, wider hips etc), but many may be cultural (eg longer fingernails, feminine clothing, longer hair, cosmetics etc). In other words, they assume that they can guess a person’s gender as simply as in the diagram below. 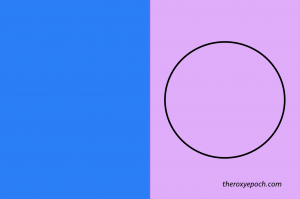 Scientific and social research is constantly redefining what gender is, confusing some, but assisting others to understand themselves in a way that was not previously possible. There are many excellent resources to be found on the internet that illuminate the incredible diversity of sex and gender, but you can watch my favourites here and here  if you like.

Genes, the timing of the release of hormones to developing foetuses in utero at various stages of development, culture and societal upbringing all contribute to the way gender is felt, experienced and expressed, both in a single moment, and how it may change over time.

Instead of the crude blue and pink binary rectangle above representing the two sexes as have been historically taught to many, maybe representing gender as a collection of personality traits, physical attributes, genetic makeup, and yes, genitals, is more appropriate, though I believe my rainbow gender image below is still an incredibly blunt tool. Think of the colour spectrum in three dimensions, perhaps, or even four …  incredibly complex and changing over time. I see personality as an expression of one’s gender. Humanity demonstrates countless personalities … I see countless genders … almost a different gender for every person. A kaleidoscope of genders. 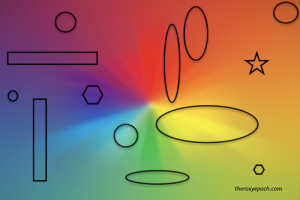 Like fractals, the more you attempt to define, or zoom in on nature, the more fine detail appears where you weren’t expecting it. If you examine fungal hyphae attached to a tree root, the hyphae and the root are apparently discrete. If you zoom in using a powerful microscope, however, it is no longer clear where one finishes and the other begins … the two become one. In this light, please remember to treat the following “definitions” more as rough guidelines … guidelines with fairly fuzzy edges. More of a ‘vibe’. People are complicated … far too complicated to define as one thing or another. Is a person either entirely good or entirely bad? No … it is much more complicated than that.

With LGBTIQ communities increasingly, though far from always, able to openly present their gender expression in public without assured violent reprisal, depending on where you are though, and being able to describe who they are and how they feel in public, words that in the past were only spoken amongst friends are now entering the vernacular.  Remember though, one word may be acceptable to, or amongst, some folk, yet offensive to, or when used by, others. It is always polite to ask a person what personal pronouns they use, or what words they use to describe themselves, before you use those words about them or to them.

Sexuality and gender diverse people being able to be themselves has led to a proliferation of new words in an attempt to better describe their minds, their bodies and their lives. Unfortunately many of these words were created by heterosexual, cisgender people and have been variously misleading, overly general or insulting. Sexuality and gender diverse people more and more are taking control over their language and are creating new words continuously. Sometimes this means that more words are available. Sometimes this results in older words being retired.

In the small town that I grew up in way back in the 1970s and 1980s, everybody at that time was assumed to be sexually straight, so in that community there was allegedly no need for even the word ‘sexuality’ to define who you were sexually attracted to. The word ‘gender’ was yet to make it’s way into colloquialism, as ‘sex’ had been performing that role thus far, however obfuscatingly. Growing up in this environment, I have found that having the words in front me helps me to picture and understand the width and breadth of humanity that surrounds us all.

Having said all of that, here is my first crude attempt at creating a collection of words that you might find in my blog, or other writing, at some point … as I understand and use them. Remember others may use these words differently, so it is always better to check first before you use them. Hyperlinks will take you to a relevant external page for further reading, often, but not always, Wikipedia. As this collection will change over time, I have also included a list of words at the end that I personally prefer to avoid, unless a person wishes to use them to describe themselves, then I will use them comfortably.

Now that I have finally published this page after working on it off and on over 4 years, I will probably tinker with it regularly as the meaning that the words carry change for me.

The Annals of History*

* UNLESS a sexuality or gender diverse person clearly tells you that they use the word to describe themselves and they freely encourage you to use that word, in conversation with, or to describe them. If not, you should avoid the following words as they are commonly considered to be outdated, inaccurate, misleading and/or offensive.

The language of gender and sexuality diverse communities is evolving at speed. As mentioned above, many words that we use to describe ourselves were given to us by cisgender heterosexual people.