It was 365 days ago today that I went to a friend’s birthday pyjama party dressed head to toe in pink. I had been taking a low dose of oestrogen for 2 months by then, so I was feeling rather fine, but physical changes visible to others were still a month or two away. The friends that I went to the party with, along with the birthday girl and her boyfriend, were the only people at the party that knew of the path that I had chosen for myself, or that life had chosen for me, depending on your perspective. I was a little bit terrified. My friends were not.

I wore pink winter pyjamas, a fluffy pink dressing gown and fluffy pink slippers (seen below). I was mis-guidedly hoping that my costume would make for me a loud-and-clear non-verbal-statement that didn’t require further explanation. It was my first foray outside my home dressed in feminine clothing. It wasn’t the first time that I had worn feminine clothing outside my house, though that’s a story for another day. 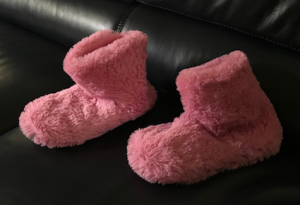 We had been at the party for an hour or two when another friend walked across the balcony towards me, accompanied by her partner. They sat down on chairs adjacent to me. After a few minutes of small talk, my friend offered “So … I wouldn’t have thought that pink would be your colour of choice for pyjamas”. I composed my thoughts and said slowly “I’m transitioning”. She thought for a moment or two, and looked quite puzzled as she said “transitioning to wearing pink?”. I chuckled as I said “No … transitioning to becoming a woman”.

Some of my friends thought the abysmal failure of my loud-and-clear non-verbal-statement was hilarious, which of course it was, but maybe not as hilarious as they thought. It was definitely a lesson for me though: that important messages need to be delivered verbally. Or perhaps in writing.